LBC Views: Life chances of the next generation could be irreparably damaged 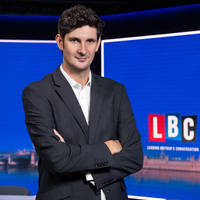 When the Scottish footballer Billy Gilmour tested positive for covid, two England players were told to self-isolate. That's despite images and videos of Scotland and England players and backroom staff being all over Gilmour at the end of the game last week.

At the time, it seemed mad that only those two players were told to self-isolate and madder still-- to me -that they had to.

Why not test them every day or twice a day to make sure they didn't have it? If they develop symptoms, then isolate them.

I said on my show at the time that if it's ok for footballers not to have to isolate despite being a contact, then why do children at school have to?

In secondary schools, 4.2 per cent were absent because of Covid and isolation, up from 1.4 per cent a week earlier.

That's almost certainly a reflection of the fact that cases in those aged between 10-19 have more than doubled in two weeks: infection rates in this age group are now 18 times higher than in the over 80s.

Like many families, we’ve been hit by this too. My daughter had to come home from pre-school last week as someone there tested positive. She was fit and healthy and yet was deprived of being able to see her friends and be taught by the brilliant team there.

Between September and December, our 6 year old was off school at least three times because of someone in the school testing positive. Weeks and weeks of education lost on top of the disruption earlier in his schooling caused by the lockdowns. He’s meant to be have had two academic school years under his belt by now but he’s been in school for less than half of that time: thank goodness my wife is an ex-primary school teacher!

The school is doing everything they can to keep those contacts down - staggered drop off times, no mixing across year groups or classes, separate playtimes, lunch in the classroom and not the hall, no cross-school activities and yet still, we are seeing more and more children denied the basics of an education.

It has to stop.

This measure - brought in through an abundance of caution - is now doing more harm than good.

Nearly all teachers will have been offered at least one jab now. Some scientists say that schools are not centres of community transmission, they are a reflection of transmission within the community. With so many adults double-jabbed, the protective force-field that now exists around the NHS has to be extended to schools.

This cannot continue into the new school year. If there's a positive case, that child isolates and it might be advisable to get your child tested. If they test negative, on they go.

Otherwise the life chances of the next generation will continue to be severely, if not irreparably, damaged.

Ukraine support about 'caring for Russia and liberating it from tyranny', says ex-ambassador

'I've had enough of masks, we've got to lose the fear', Andrew Castle declares

Tributes paid to soldier, 19, who died 'suddenly' at Salisbury Plain base

'Time to be ourselves again': Almost all of Ireland's covid restrictions lifted