Twelve US National Guard members have been removed from Joe Biden's inauguration ceremony after intelligence revealed they had suspected ties to extremist groups.

The chief of the US National Guard confirmed a total of 12 personnel had been pulled from duty at the high-security event.

Two of the soldiers were removed from duty earlier today because of "inappropriate comments or texts".

A further 10 were removed later on Tuesday afternoon after being identified as having links to fringe far-right groups or having posted extremist remarks online.

The soldiers were stood down from Wednesday's security mission in Washington DC to protect the president-elect.

It came as part of a strict screening process by the Pentagon and FBI that was introduced following the insurrection at the US Capitol on 6 January.

The city has been placed under strict security measures since the violence, which left five people dead - including a police officer.

There is not believed to be any immediate threat to Mr Biden or the ceremony following the discovery.

Explained: When is Joe Biden's inauguration and will Donald Trump attend?

A defence official told CNN it is not clear whether two of the troops have any connection to each other or what incident triggered their removal.

Commenting on the decision, a spokesperson for the National Guard told the media outlet: "Due to operational security, we do not discuss the process nor the outcome of the vetting process for military members supporting the inauguration."

On Monday, acting secretary of defence Christopher Miller said in a statement that there is "no intelligence indicating an insider threat" to the ceremony.

His comments came shortly after the head of the DC National Guard confirmed that the FBI would be vetting all those involved in the security mission.

"As is normal for military support to large security events, the department will vet National Guardsmen who are in Washington, DC," Mr Miller wrote.

Explained: How to watch Biden’s inauguration in UK from start time to TV schedule

"While we have no intelligence indicating an insider threat, we are leaving no stone unturned in securing the capital.

"This type of vetting often takes place by law enforcement for significant security events. However, in this case, the scope of military participation is unique."

More than 20,000 National Guardsmen have been patrolling the capital's streets in the buildup to the swearing-in event.

Their presence has been deemed necessary to prevent similar scenes occurring in the city as to what was witnessed almost two weeks ago.

More than 30 police officers from more than a dozen states joined the mob - which also included US military veterans - in storming the Capitol building.

It is not clear which states the two soldiers are from or what fringe militia groups they are connected to. 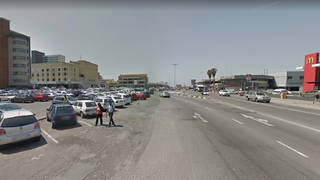 Slave trade history 'should be taught as widely as Holocaust', says Prince Charles

Murder probe after man, 31, stabbed to death outside Hounslow pub

'Get off the fence': Labour MPs defy Starmer over rail strikes amid 'simmering resentment'

Climate club: How Germany hopes to keep G7 leaders’ focus on the environment

Biden arrives in Europe ahead of G7 and Nato summits

Milan to turn off fountains as drought hits Italy