Police have released harrowing footage of a women in her 80’s being mugged - in a bid to find the sick crook.

The woman, aged in her 80s, was robbed at just after  1 March in Thomas More Way, N2 after being followed by a man who pulled her to the ground and snatched her handbag.

The suspect can bee seen stalking the victim in his car, a grey Volkswagen Golf, before he launched the sick attack.

The woman sustained injuries to her face and knee and was taken to a north London hospital by the London Ambulance Service as a precaution.

The suspect drove away from the area in a grey Volkswagen Golf whichy. He is described as a white, fair-skinned man, around 5ft 6ins in height and of slim build. He was wearing a black woolly hat, a dark jumper and khaki trousers.

A still image of the suspect is also being released, which shows him filling up the same car - which was using false number plates - at a petrol station in North Finchley.

The robber may have links to the North Finchley, Southgate or Arnos Grove areas, and may have had access to the grey VW Golf, on different number plates, after the incident.

A quantity of cash was stolen from the victim. She had withdrawn the money from a bank in Ballards Lane, N3 around 30 minutes before the robbery, before getting a bus to East Finchley.

It is possible that the woman had been seen withdrawing cash and followed to the scene of the robbery.

Anyone with information that may assist the investigation or who recognises either of the men shown in CCTV images is asked to call detectives at Barnet CID via 101. To remain anonymous call Crimestoppers on 0800 555 111. 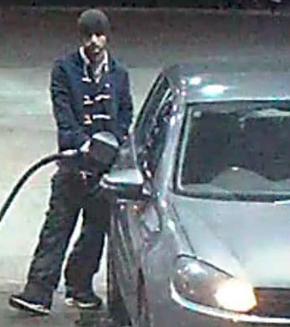 Man, 25, arrested after two women 'raped' with one suffering 'significant injuries' in Manchester